Appreciating a Decade of House of Knowledge!

In 2007, a man from Germany decided it was time to open a kindergarten in Beijing, House of Knowledge (HoK) was born. When Farshad Danicek, founder of the international kindergarten, began this educational journey 10 years ago, he could not have known how far his relatively unconventional approach to education was going to take him.

What started out as a budding kindergarten with 36 children in the former Liyuan Campus, has now, a decade later, expanded to include elementary years and moved on to two new campuses, one in Shunyi, the other near Chaoyang Park. Now, HoK is home to over 170 students.

“Ten years ago, I had no idea how to be an entrepreneur. I became one by entering China. I’m not quite sure how the whole thing started, but more important to me was to stay in the field of education. The most crucial thing to me at that point was not only to create a place for children but to create a place for families,” says Danicek.

10 Years of Hands-On Experience
Nana has been at HoK since day one. Known around campus as one of the school’s founding teachers, Nana recounts well how it all began: 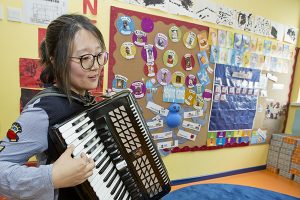 “A funny story was when I went with Farshad [Danicek] and three kids to the playground. One of the old neighbors said, ‘Oh, those are your kids,’ because in the beginning, I had only three students. But now we have so many kids. I am always excited to see House of Knowledge grow.”

As we stroll down the memory lane, it becomes quite obvious how much the school has progressed. Initially, everyone had to get on board with each task, be it to paint walls or to spread the word about this new teaching concept that had come to Beijing.

Nana recalls dressing up like an office worker and going door-to-door in a German office building to distribute flyers. But even though the school has expanded and the staff increased, this hands-on spirit of getting involved in the task at hand is still very much present in the school culture, even today and on every level of the school’s management.

There is never a day when Danicek is not at school; and when he is, he doesn’t find himself shut away in a secluded office. He much rather prefers being among the students and parents.

“My biggest success is joining in their daily life, to see with your own eyes what’s actually going on. I’ve been asked very often if I plan on stepping down. But you know what, no. I love to go to school. For me, it’s not a job; it’s a calling.

“I got my first office after almost 10 years. Parents would wait in the piazza (reception area by the entrance) and then call me ‘Farshad, I’m in your office, where are you?’ It was a hilarious story saying ‘Guys, I finally have something other people have from the very first day.’ It’s quite unusual, sitting in the public library and emailing, using a public printer. It’s unusual, but this is… House of Knowledge.”

Never Standing Still
Danicek counts being able to grow the school to cover elementary as one of his biggest successes. However, for the cheerful and optimistic German, standing still is never an option. There are new accreditations, cooperations, and expansions underway.

It’s not a surprise, considering one of the core values of HoK, according to Danicek, is the idea that learning never stops. “The most important thing in education is you do not leave school and are ready-made. You will explore and learn afterward. School is just one of the many steps.”

It’s a mantra he is not just trying to teach his students, but one he is intent on living himself.

“I still have a very strong vision of what I want to do, and what I think my students deserve. I’m working on that. And you have to combine that vision with patience. But that is my weakness, I’m not so patient. That’s what I have learned in the past years, to take small steps.”

Celebrating the Great Success
Unsurprisingly, given his down-to-earth approach, Danicek hopes to toast the anniversary with friends and family. And he shares there certainly will be tears:

“But more importantly, we will celebrate not the last ten years, but the future path. I want to celebrate with my friends the upcoming ten years.”