A young Chinese girl plays on a beach in Thailand, making sandcastles while her parents look on during a well-deserved break from work and school, but the best aspect of that girl’s classroom life stays with her during that vacation. She sees another child, about her age, fair-haired, playing in the water, and decides to walk up then invites her to play. The Chinese child first speaks in German to the other child but this doesn’t get a response until she switches to English and gets the response she was hoping for then walk away chatting and playing.
The level of confidence, the ease at which to strike up a conversation regardless of grammatical mistakes, the convergence of everyday communication and classroom lessons were all valuable aspects that came in handy for the child, who studies at House of Knowledge School (HoK). The child’s parents shared that charming story with founder and educational director Farshad Danicek.

It’s moments like that when a child overcomes shyness,  has the ability to communicate, and make a new friend that Danicek has dreamed of enriching his students’ education experience ever since he founded the school in 2007. 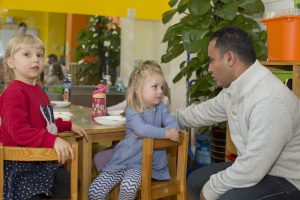 To achieve this, Danicek and his HoK colleagues have adopted a multilingual approach in the entire school. Parents have the option of choosing between a trilingual or bilingual program with a Reggio Emilia-inspired curriculum in its early years program. The multilingual environment is also applicable to its elementary school programs where students can pick between a bilingual and trilingual program.

Reggio Emilia is a holistic educational approach that’s child-centred and empowers children to explore, question, and discover. Moreover, it supports and reinforces language acquisition through the many different ways children use to communicate, not only just spoken word but also through art, singing, dancing, and playing (you can read more about its post-WWII, psychology inclined origins here).

HoK utilizes this educational approach when exposing its students to English, Chinese (putonghua), and German on a regular basis through language immersion. The benefits of multilingualism extend beyond just the language itself, it opens their minds to multiculturalism, has neurological benefits, better social, and communication skills.

Below, Danicek tells us more about the inspirational virtues of this approach, and how it is setting up HoK’s students for success. 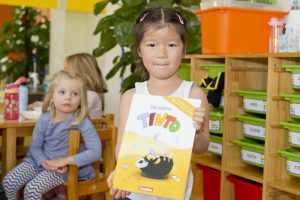 We’ll often use this approach to teach students a classic story or play in one language, then build on it in other languages (see image below). So the class might read a story in German, and later the English teacher will come and guide the children into building crafts inspired by the story’s characters and setting. Then the Chinese teachers come in and will guide an activity about the story in Mandarin, and we just keep going.

After all those activities, the children will think about the story in three different languages, and if you go up and ask a child about the story, they’ll reply to you in the language you asked. Obviously, they’ll be stronger in one language than the others, but they can get many ideas and points across in the other languages with surprising success.

Our goal for teaching multiple languages is to increase their level of understanding, to help them communicate better, and also to increase their awareness and thinking about broader possibilities. We want them to start thinking: “Oh there’s something else.”

You won’t have the children stepping back, saying “I can’t speak that language,” when they are struggling to communicate. They’ll at least give it a try. 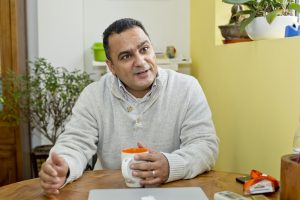 In our school’s multilingual environment, the children learn to try and make themselves understood. And they’ll learn not to be afraid of making mistakes, which encourages children to have dedication and perseverance from an early age. Now, think of where that overlaps in other areas? That attitude can carry over to all of their learning.

We also adopt that attitude as teachers. If a child comes and asks us something, we don’t always just tell them the answer. We often take a step back and say “I don’t know, let’s find out together.” By stepping back as a teacher, and telling the students “Good job researching this with me, you’re so clever, I’ve learned so much from you,” it gives the child so much confidence.

It’s also important in this environment to let a mistake be a mistake. We guide them to the facts and knowledge, instead of dictating it to them. If you scold a child and make them less confident, and take a step back, you’ve achieved nothing. But by you stepping back, and them stepping forward, you’re helping them to grow.