The Reggio Emilia Approach: The Unique Role of the Teacher

Reggio Emilia approach to education is a concept named after an Italian city that offers an unprecedented early development strategy for children. In 2007, this unique way of teaching made its first appearance on the Beijing scene, as HoK opened its doors.

But what is so special about the Reggio Emilia way? Teachers! It mostly hinges on the teachers and their responsibilities as educators, which are very different from the conventional approach to education. 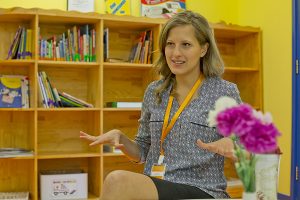 Respecting the Child
It’s still common for a teacher to take on the role of authority and presenter of knowledge, the one who tells the students what they need to know. However, the Reggio Emilia concept calls for the teacher to act more as a learning partner to the children rather than someone who knows everything better.

“A Reggio teacher is not primarily providing knowledge. It’s providing knowledge in the path. This means even if your answer might be wrong, you listen to it as the teacher,” says Farshad Danicek, co-founder of HoK. “In Reggio Emilia what the teachers strive to do is deliberately not give these kinds of answers, and instead get down on the level with the children literally and figuratively and go through the learning process together,” shares Amanda Micossi, kindergarten principal at the school’s Chaoyang Park Campus.

All the teachers sit on the small, child-sized chairs, or on the floor with the children rather than standing up and staring at them from up above.

At HoK, the belief is that having this positive, strong, and trusting relationship with the teachers and school from a very young age strongly influences a child’s attitude towards the school for the rest of its life.

Giving the Child Space
This educational approach also helps teachers ensure that they don’t limit the students’ creative space. Micossi shows us the school’s art room and explains that many children’s creativity is all too frequently inhibited by the opinions and expectations placed upon them by society.

“One of the founding ideas of Reggio Emilia is that when children are born they have infinite ways of expressing themselves, but over time teachers will say ‘What, no, what are you talking about? Don’t do it like this! And parents will say ‘No, that’s the wrong way. And friends will say ‘That’s not cool’. And slowly, slowly all these ways of expression get tamped down to the acceptable one,” explains Micossi. 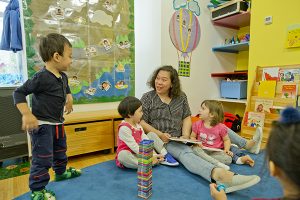 “But when we want innovative thinkers and free spirits, to have them whittled down into the same mould makes no sense. So, that’s the idea of the art room. When they come here the teacher will say ‘Ok, we’re making dinosaurs. Go’.”

Student-Led Learning
Reggio Emilia calls for student-led learning. The teacher needs to take a backseat in this environment and draw from the children’s thirst for knowledge and interests to develop a teaching plan.

For example, when class reconvenes after the holidays, children might have a classroom conversation about where they went and how they went there by train, by bus, or by plane. From this classroom interaction, the teacher can then draw the topic of transportation and work with the children on this project in many different ways.

It starts with a mind map that takes into account all the questions the children have about certain topics such as where do planes go? How do they fly? Why can’t they go to the moon? The flexibility of the teacher following the children’s inquisitiveness means that the process could take you anywhere, and in some cases to unexpected heights. It wasn’t until Micossi took me around campus, that I fully understood what this actually means in practice. 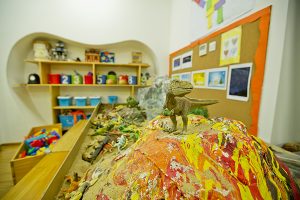 “This class, one question they had, was when they were doing airplanes one child says airplanes can do ‘1,2,3, blast off’, and then the other said, ‘No, planes don’t do that. Rockets do.’ And then they were looking at planes and rockets and why one of them blasts off. So they looked at the direction of the turbines,” Micossi tells me. “The teacher was in the teacher’s room doing research and we were all trying to figure it out too. If someone else was told to plan a lesson about propulsion and thrust for three-year-olds, they’d go ‘I quit’, but that’s exactly what it was.”

A hands-on attitude permeates all levels of House of Knowledge. Both Micossi and Danicek tell me how much they love going to class and speaking to the children, or greeting them and their parents in the mornings, eschewing the danger of becoming too removed from the classrooms in their management levels.

“I’m really spending day by day at school. I like to be there. It’s not that I just started the business and then stepped out,” explains Danicek, adding: “Education has to be lived. You can’t stop being a student. This is what I enjoy most about my life and my duties at House of Knowledge, to be a child myself again, being in the classes, and working on projects with the children.”

Micossi expresses the same sentiment; despite her becoming principal she still spends every day in class with the children.